Suddenly, it seemed I was being followed. Out of the shadow, my won shape now preceded me. I put my hand on the canyon wall to counter the disorientation that seemed to come with stopping and looked back. Indeed, I was no longer alone on my grand canyon exploration. The big moon had cleared the South Rim of the Grand Canyon and was lighting my way down the dusty trail. I could only smile. I felt wonderful. True, I was eight miles into a 48-mile run. But you take wonderful when you feel it. 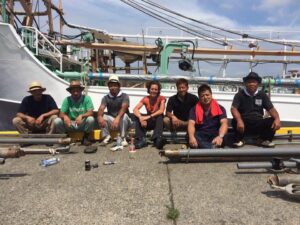 I had started running down the Bright Angel trail at 2 a.m. I was more than a little unnerved by the signs advising me that attempting to go from the rim to the river and back in a single day was to court death. I planned on running twice that far from the South Rim to the North Rim and back in a single day. This was not a groundbreaking endeavor. Other people, people who, like myself, spend their weeks running long, long miles and loving it, do this rim-to-rim-to-rim-run routinely. But I was was, as usual, doing it alone, which increases teh problems that may crop up. And I train in Missoula, Montana, which by mid-May had not offered any days warm enough to even begin to acclimate me to the heat of the Grand Canyon.

“As you go through life there are things you would rather not do alone.”

There was an element of foolish daring to this run. But once I learned I was going to Arizona for a Colorado River raft trip, I knew I had to make the run. As you go through lfie there are things you would rather not do alone. Things that are more fun, easier, safer, maybe even just made possible by the presence of others. It is my lot in life to be too impatient to wait for other people to buy into my plans, too stubborn to change my ambitions, too self-confident to see solitude as a stop sign. I do a lot of wacky stuff alone, though I truly love my friends who come along on my death marches or who take me with them on their form of adventure or grand canyon exploration.

For several years I had been contemplating an endurance adventure that I now knew I would do alone. There was no point any longer in asking anyone to join me. I hope a good, head clearing run would force the notion through the fine filters of my subconscious and yield some kind of new clarity on an issue I had over thought into a turbulent mess. At issue was whether I was going to pursue becoming a single mother by choice, or decide to eschew motherhood. Somehow I thought running back and forth across the Grand Canyon might shine some light on the 20 year endurance challenge single mothering would entail.

I crossed the Colorado just before dawn and was at the North Rim by 9 a.m. I wasn’t moving particularly quickly. Before the moon joined me, I had been creeping along at an overly cautious crawl, frustrated that I kept twisting my ankle on the bumps the mules etch into their highway. But I had picked it up considerably through Bright Angel Canyon and once I reached the rim, I hammered the North Kaibab Trail, still remember to stop and just marvel at the colors, the depth and texture, the flowers of the canyons. I chatted with hikers and stopped to refill my water pack at every opportunity. I ate y apples and beef jerky and gel. I swallowed my electrolyte capsules.

As my body reveled in the run, colors became brighter, people became perfect, water became truly wonderful and the sight of Roaring Springs gushing straight out of the side of the canyon seemed a miracle worthy of tears. The smallest kindness of strangers could make me choke back a sob. My thoughts stayed simple and increasingly certain that I can do whatever I set my mind to and do it with a sense of humor and my own goofy form of grace.

This is the euphoria for which I run.

I floated up the South Rim, walking and running, remarking that the last three miles sure do stretch on, that deeply inhaling atomized mule urine had a wonderful way of clearing my head. I got to the top an some strangers handed me a beer and took my picture with my disposable camera. I loved them for that. They were going to do my run tomorrow. But for today, it was mine and I was very happy.

The Adventure in the Grand Canyon

My euphoria lasted almost a month. It was augmented by the raft trip, this crazy new relations I felt I had with the Grand Canyon, a flotilla of new and very special friends. I wrote in my journal a lot during my Canyon time. It’s something I do almost exclusively when I travel but I am trying to keep up now that I’m back home. Is till have a lot of thinking to do about this whole kid deal, but I don’t have to do the thinking alone. I have a community willing to listen and advise, if only I ask. If I gained any clarity from my run that seemed to bit it: I like doing things alone, but it would be worthwhile to explore ways to include more people in my life.

One way I’m including more, wonderful, people in my life is to take over some Pure E online editing duties from Courtney Marchesani, Pure E’s muse and inspiration. I live in Missoula, where my family roots run deep. But I come from an East Coast childhood and a dozen years a journalist in Wyoming and Colorado, so I am exploring the whole notion of what it means to live in the Northwest.