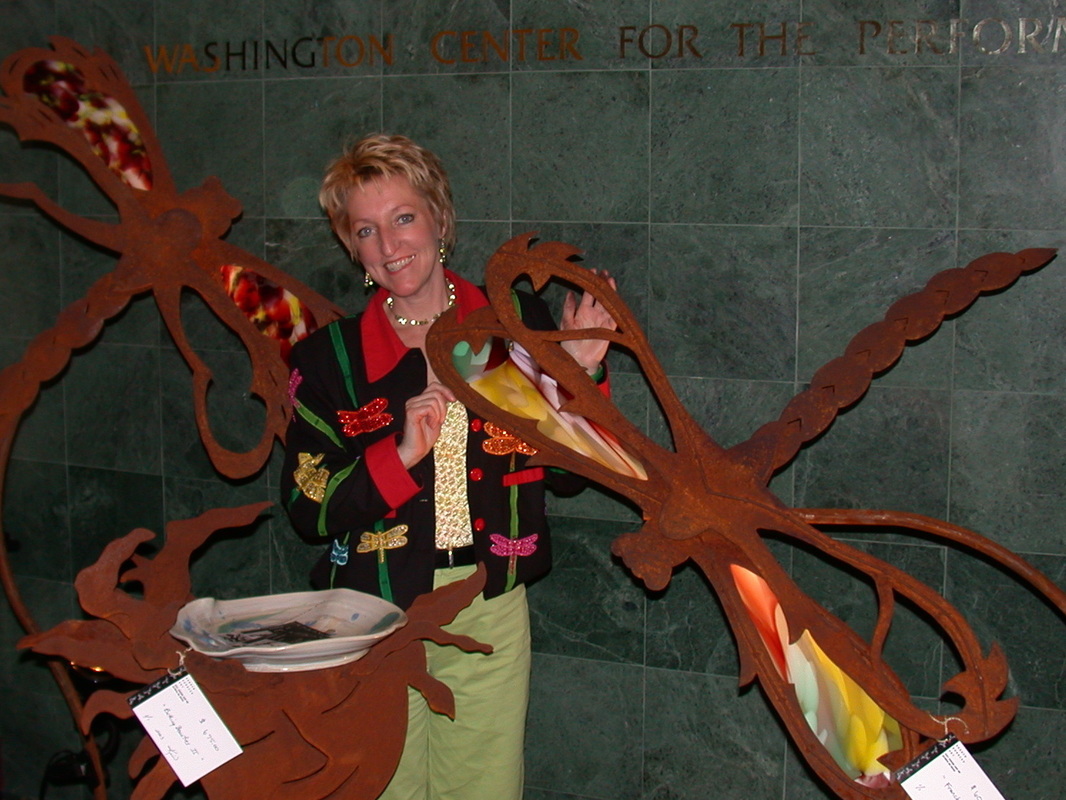 Just one look and illumination. Traveling exactly where, I cannot tell. A waterfall of cobalt light pools beneath outstretched butterfly wings. As it pours forth, slinking down hidden planes,Artist Kim Merriman knows where it’s headed. She is it’s creator, “It’s a spark of light in the soul that it touches.” 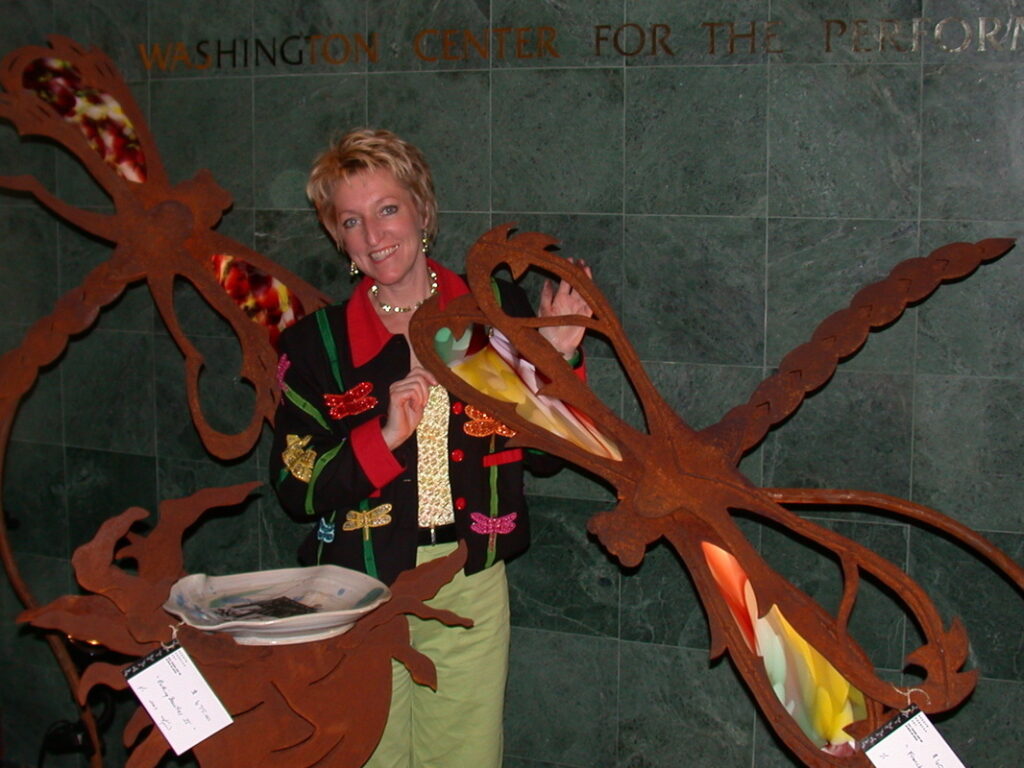 Artist Kim Merriman is the owner of Garden Goddess Art. She molds metal like an alchemist cross-bred with a blacksmith, boring holes through steel and pounding hard metallics with a sweaty vengeance. Her medium fuses glass with metal marrying one odd couple.

Not Oscar and Felix either. Instead this is Lily and Bett-R-Fly. Two goddesses from the garden collection. Their brightness flows along a severe edge and bounces around a tiny portal Kim has carved with her graceful sturdy hands. Compared to the austere statuesque profiles, these small openings emit rays of natural warmth. With just one look, you know Kim is as natural an artist as the light with which she imbues her creations. In her youth, she dreamt she would be a graphic designer. This hope was dashed since there wasn’t enough money to go to college.

It would have to wait.

In looking back through her career she says her interest in political issues, “was woven all the way through.” Specifically, her innate ability to understand individuals not able to go to school due to economic hardship. “I firmly believe in my own soul that people who want to go to school, should be allowed to go to school.” This belief led to her own challenges with higher education. After so long, she was unsure whether she was college material or not. But she wasn’t facing these non-traditional challenges to go to college for the childhood graphic design dream anymore; now it was all about Political Science and Political Economy.

Kim’s Work As a Photographer

Working for the state legislature was a fascination that stuck like a nail embedded in a knotty plank. She lined up her real-world experience as a photographer, political references, high school transcripts, and applied for admission at the only institution, out of the six major public schools, designed around an alternative model: Evergreen State College. After gaining admission, she worked full time for Mike Kreidler, (then state Senator, currently state insurance commissioner). Additionally, she went to school part time. When Mike ran for congress and won the congressional seat she had to make a big decision: move to the upper echelon in government or finish her Bachelor’s Degree at home.

Her Work With Lobbying

“It was important to finish the degree. I couldn’t imagine moving to Washington D.C.” At this stage in her life she decided to finish what she started. Fate came knocking once again when the Evergreen College lobbyist took a leave of absence in 1994. Due to Kim’s deep understanding of a socio-political issues, especially the impact of being able to attain a higher education, she “vowed to have that lobbying job.” After working in lobbying for seven years, “loving every minute of it” Kim’s destiny pulled a strange new twist, affording a new career path with a very artistic flavor.

“It was the Spring of 2000, I decided to take a class at Evergreen (as an employee).” The new class was Introduction to Metalwork. Artist Kim Merriman planned to make a few privacy screens for her home (something she knew nothing about). “I wanted something more welcoming than utility boxes, which were the first thing that you saw when you came to our home.” The class was for people who hadn’t a clue about metalwork. Experiencing the machines and making a few class projects was the objective. “I knew the second I walked across the threshold [that first night] I was going to be different when I left.”

Something intangible gripped Kim, squeezing her with a desire to acquire all the equipment she had used at the college. Her husband figured the compulsion would pass. It didn’t. After cordoning off space in the garage, she built a workbench and then bought a plasma cutter, drill press, welder, and kiln. While she was designing one of the screens, what she’ll call the creative process, she had an intuitive flash. It occurred to her to incorporate glass so that, “they were like nightlights, big welcoming beacons.” By the end of the course, she had constructed the privacy screens she intended to. And she installed spotlights to reflect light behind the creations.

As she and her husband edged down the walkway hand-in-hand in pitch black night, all was dark except illuminated pieces of steel, copper, and glass. Kim still remembers the rush of seeing her craftsmanship for the first time. “It was transforming.” Clearly, she carries that transformation deep inside her. Kim decided to stick her neck out and enter the Olympia Arts Walk. After finding a sponsor for her work, in October of 2000, she set up another walkway. But this time she used green cedar boughs interwoven with her display pieces and luminaries. She finished the pathway off with a touch of light behind them. People perusing the art walk would meander through, tip-toeing through the illumination. “I sold six pieces, took ten commissions, and quit my job on Tuesday.” It was an instantaneous shift.

Artist Kim Merriman started Garden Goddess Art, as with everything else, with much verve and gusto. Yet this woman with a wide sterling smile says, “I wouldn’t have jumped off this cliff if I’d thought of the economic side of it.” She’s gone down many roads to get here. And I can see her captivated in her secluded “zone”. The smell of scorched metal rising as she begins to weld. The flicker of her torch’s flame, creating a million flecks of red-orange firefly sparks where she laid her claim in the garage so many months before. She is in solitude, surrounded by darkness. I place of healing and new life. “Metal is the medium that deals with grief,” she tells me. A smoky stench fills the scorched lungs, leaving residual elemental fibers of metal. Pounding relentless seams sends pain shooting up the metacarpals. Metalwork is not glamorous but once finished, in all its completion, that one spark of light is, “salve to the soul.”

Although still referred to as ‘the garden goddess’, Artist Kim Merrimen has changed her business name to Kim Merriman Art. “It’s in recognition of ‘art imitates life – or life imitates art.” Kim’s Garden Goddess creations are still a passion, but so is her desire to explore unknown territory. She is now creating interior sculptures, using the same odd coupling of fused glass and brushed metals. Like all her creations, illumination is key. The polished glimmers of light, not unlike those of a cutting torch are what brings her and her art to life.