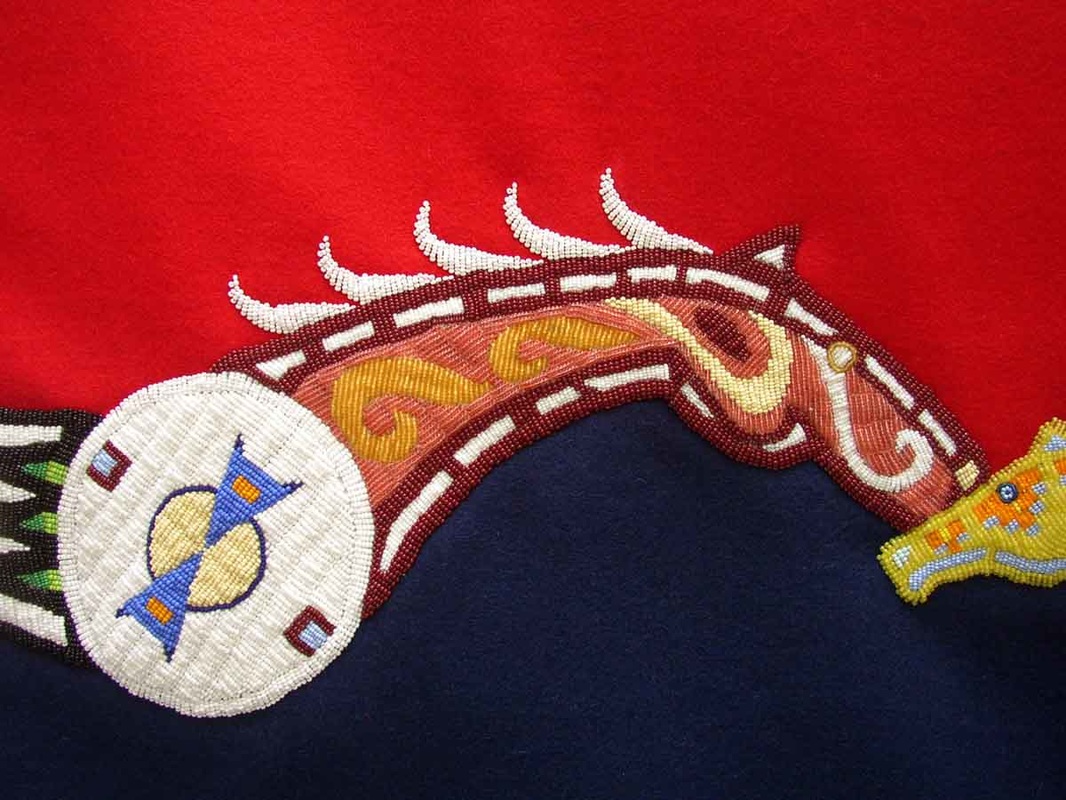 Can you open a box and find your way home? Molly Murphy, a Missoula-based artist of Oglala Lakota, descent thinks so. She has created a box of traditional inspiration and personal abstraction. The exterior of the box is covered in abstract, free-form beaded designs inspired by original rawhide containers. Pieces from Molly Murphy Art is rich in tradition and culture.

The color choices of red, black, white, and orange-yellow are traditional Lakota colors. The outer voice of the box hints of tradition and culture. 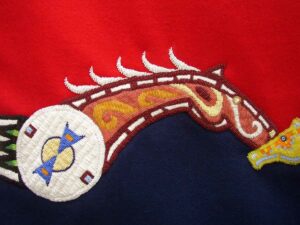 Open it and a map — intricate white lines over a landscape of red with only rivers as a guide. The interior of the box reveals latitude and longitude spanning the distance between Missoula, Montana, and the Pine Ridge Reservation in South Dakota. The inner voice of the box speaks of conflicting emotions about home, place and identity. Murphy calls the work “How to Find Home: Lat and Long Pine Ridge to Missoula.” It is a journey she is taking through art.

“It is said that there is no word for ‘art’ in Native American languages. And, by extension, neither is there a word for ‘artist,’ ” says Janeen Antoine, director and co-founder of American Indian Contemporary Arts. “Creation was something done by everyone, men and women, young and old, as a natural outcome and progression of life. One could look around and see artistry everywhere. We created all items, ceremonial and utilitarian, to be simultaneously beautiful and functional.”

Murphy’s journey of creation has taken her through the University of Montana, where she graduated with a BFA in 2004. Since then she has pursued a full-time career as an artist. She specializes in contemporary beadwork and printmaking.

This box is part of her Native Voice Box Series. It is a concept that emerged with the prototype box she created for her senior thesis.

“How To Find Home”

Murphy says, “How To Find Home” is her most personal art piece to date. As a Native American with white ancestors, she has many conflicting emotions about home. She was raised away from the reservation and has wondered how she was to define herself and her connection to her tribal culture. She chose not to represent any roads, towns, or land features in the box because the map is an abstract, an emotional map. It is more like an anchor than a guide.

Murphy chose beadwork as a primary medium because it is an authentic path to storytelling. She says other media seem like borrowing someone else’s clothes. “When I was an adult in college, the art history courses exposed me to artists I would have never known existed.

I fell in love with the work of contemporary artists such as Baldessari, Oldenburg, Rothko, Hesse, and Thiebaud. I started to see a potential in taking the skills and crafts I learned when I was very young to create beautiful objects and make critical commentary.”

Her mesmerizing creations are a fusion of the past and present. “I have been raised to have a deep respect for the material and spiritual culture of my tribal community and this created some hurdles for me,” Murphy said. “It took a long time for me to give myself permission to change and alter patterns and forms that had been given to me in a strict manner”

“After I began to experiment and alter these forms, I realized that no one else had been holding me back with taboo or disapproval. I had held myself back with a narrow view of tradition and change. To keep our artwork stagnant keeps our culture stagnant and also robs us of the opportunity for exciting new developments.”

“Changing Hands: Art Without Reservation 2: Contemporary Native American Art from the West, Northwest & Pacific,” is one of three exhibitions organized by the Museum of Arts & Design in New York that highlight the rich diversity of creativity in craft, art, and also design being produced by indigenous artists of the United States and Canada.

She alters function as well, in that this courting blanket represents a woman who chooses her own partner. Rather than the stereotype of native women being purchased or traded. “Parfleche Abstraction, Cool Tones/Warm Tones” are traditional-style bandolier bags that Murphy executed as an elaborate color study. The pair of bags has bold geometric designs in yellow and blue wool with red and black bead work. Additionally, each bag is a reflection of the other in pattern and color creating a trick of the eye.

(2006) Reversing the yellow and blue fabric from one bag to the next creates an interesting color study in warm tones and cool tones within the composition. The “Changing Hands: Art Without Reservation 2” is currently in Indianapolis at the Ieteljorg Museum of American Indians And Western Art until August 20. The exhibit will then make stops in Naples, FL and Tulsa, OK. There is an extended stay in Alaska at the Anchorage Museum of History and also Art May –September 2007.

Murphy’s work has been inspired by the dance outfits of her youth. In her artist’s statement for the Changing Hands Exhibit, she explains:

“Dancing at powwows at a young age was an overwhelming design experience. Dancers incorporate both traditional and contemporary elements in their stunning outfits. When you combine the dance clothing with music, prayer and dance the overall experience is engaging on a physical, social, and intellectual level. I still carry the memories of the best outfit design and bead work. And the phenomenon of how different graphic design looks in motion.

The skill it requires to create a dance outfit that balances all of the functions required (appealing appearance far and close, comfortable. It is conforming to all social taboos, lasting for years under athletic conditions. And it is also different enough to distinguish you from all other dancers at a glance) made me understand how far bead work could be taken.”

One of my favorite pieces of Murphy’s work is the “New Possibilities Bags: Women Stepping Forward.” Each bag has three women represented in beadwork on a red wool background reminiscent of 19th century plains-style ledger drawings. The women who are wearing chief’s headdresses. The headdresses were inspired by an exhibition dance by the women of the Blackfeet War Bonnet Society. Additionally, it was performed at Kyiyo Pow Wow in 2005.

Another inspiration was an artist symposium Murphy attended. She witnessed accomplished Native women artists instinctively taking a back seat at a public event to the men present. Murphy also felt a need to project an image of women in leadership roles. Of the six figures, one is wearing a mortarboard. She carries a diploma to emphasize the role education has played in bringing native women to leadership positions.

Murphy is currently working on a variety of new projects. These also include continuing the box series and a renewed focus on printmaking. Right now she is busy, beading dance outfits for herself and her five-year-old daughter, Ana. Molly has been both a traditional dancer and a fancy dancer. On the other hand, Ana is looking forward to a new jingle dance dress.

Murphy hopes that a young girl with artistic aspirations might see her work in motion at a pow wow and take from it permission to combine tradition and self. Being an artist, she says, is about finding the perfect way to represent yourself as well as your story.

A new generation reveals a voice that embodies ancient traditions while incorporating contemporary ideas, forms and styles. Each generation has a story to share and searches for authentic ways to tell it. Time, change, opportunity, and also growth can create many new possibilities.

Molly Murphy can be reached at http://mollymurphyart.blogspot.com